Modern equatorial mounts are capable of automatically performing a Meridian Flip (MF). EKOS uses this capability and provides the workflow to coordinate the actions required, both within EKOS itself, and with the mount, to fully automate the MF process. 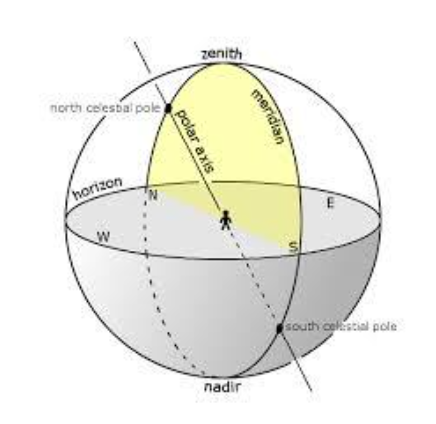 Typically, an equatorial mount in the Northern hemisphere, when polar aligned, will point to objects East of the polar axis by moving the telescope to the West side of the pier or tripod (counterweights down and to the East). As the object tracks through the night, the point comes where it reaches the Southern Meridian with the telescope now pointing south. The counterweight bar will now be horizontal.

Typically, the mount could continue to track as the object moves West by lowering the telescope and raising the counterweights. There will, however, come a point where the telescope or imaging equipment will collide with the tripod or pier. How far past the Meridian the scope could track before colliding will depend on the equipment being used. The way to avoid the collision is to flip the telescope from the West side of the pier over to the East side of the pier, i.e. to perform a MF. Now as the object is tracked further West, the scope will rise and the counterweights fall and there is no danger of the telescope or imaging train colliding with the tripod or pier.

The mount’s movements are slightly different when tracking through the Northern Meridian; typically as the object approaches the Meridian from the west, the telescope will be on the western side of the Mount, and a MF will occur at the Meridian and flip the telescope to the eastern side.

The following is a list of actions that need to be done in order to perform an automated MF:

Preparing the Mount for a MF

It is recommended to understand how your mount performs a MF and understand the limitations it has, along with settings that may be required to be activated. Here are some things to consider:

Ensure cables, etc, are secure and will not snag during the MF. A good idea is to practice in daylight where snagging cables are more obvious. See the Testing in Daylight section.

How the Mount Performs a MF

Each mount is different so ensure you understand how your mount works, but the general process is: 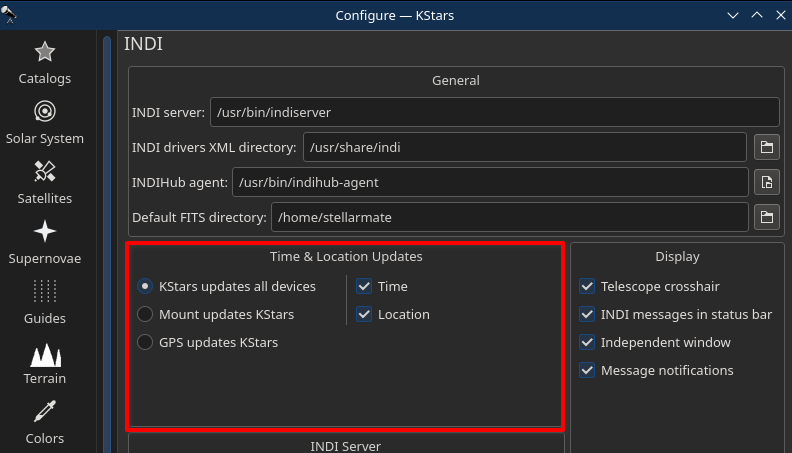 EKOS uses the concept of Hour Angle (HA). HA is the angle between the Meridian and the Hour Circle. The Hour Circle is a circle through both celestial poles and the object in question. Since HA is an angle it can be measured in degrees. Another convention is to measure it in hours, minutes and seconds. Since a complete revolution (360° occurs in 24 sidereal hours) it is possible to use hours as a unit of measurement of the HA; 1 hour equals 15°.

The EKOS convention (in the Northern hemisphere):

So, when the Meridian is crossed:

How EKOS Performs a MF

The initial setup for a MF is held on the Mount tab, in the Meridian Flip section. 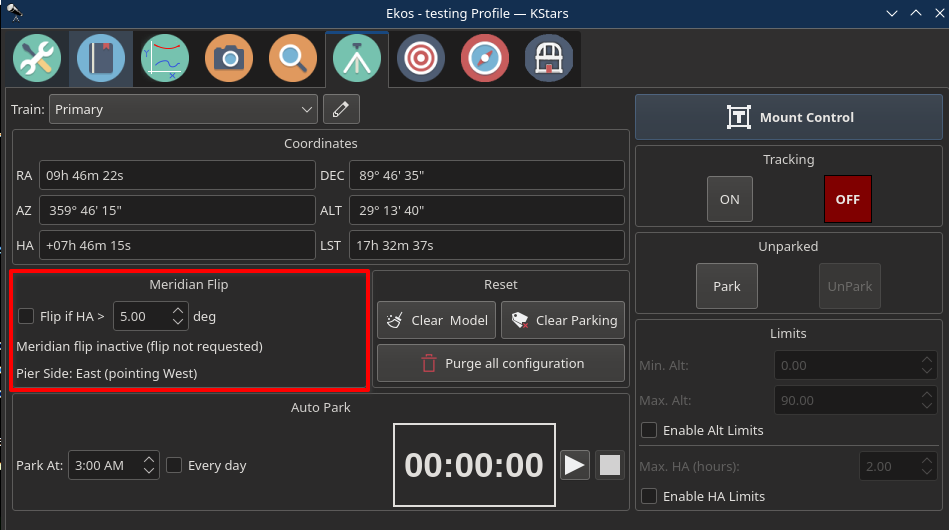 When Flip if HA > is checked then EKOS sets a timer for when to start the MF process based on the position of the current target and setting of the HA. It also displays the current Pier Side. In the example above, the target being tracked has an Azimuth of 173° 44’ 03”, so just short of the Meridian, and as displayed it will reach the Meridian in 16mins 51secs. The HA limit has been set to 0.1 hours which is 6mins. Therefore, the MF will occur in 16mins 51 secs + 6mins = 22mins and 51secs. This is displayed as a counter in the status in the red box and will count down to zero.

When the counter reaches zero, EKOS will start the MF process.

Setting the HA at which EKOS will start the MF requires knowledge of the following:

In the following graphic, time is increasing from left to right as the mount tracks past the Meridian. It lays out the order of events: 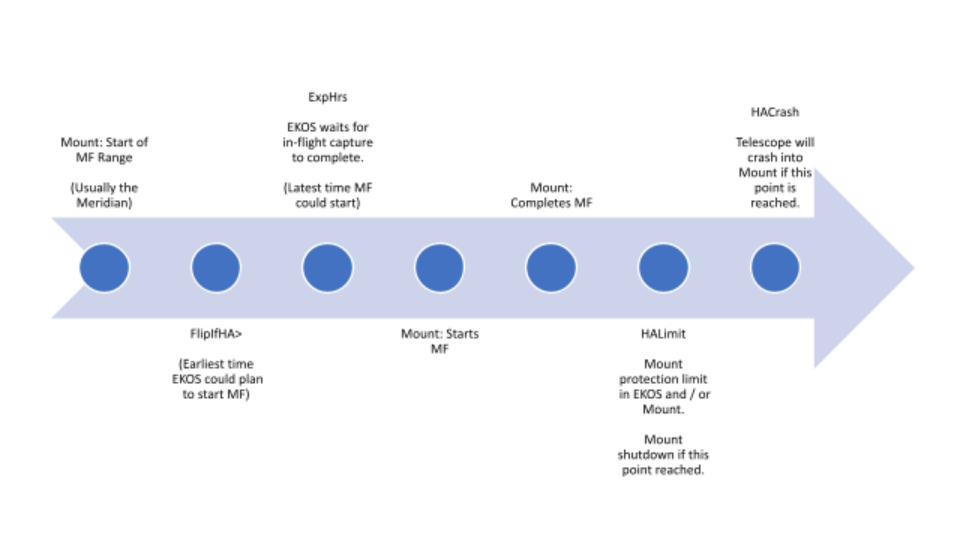 How EKOS organises the MF

Firstly, EKOS sets a status to inform the Capture Module that a MF is pending and to pause when it reaches the next convenient point. Capture will finish off the current exposure that is running and complete any associated processing such as dithering and settling, but will not start the next sub-exposure in the sequence.

Note, this actually means that the MF will happen sometime during the range of time from when the MF is scheduled until the sub-exposure capture time after this (plus dither + settle time). So when planning the setup of the MF make sure that this is taken into account. For example, for 30min exposures ensure that the possible extra 30+mins will not take the Mount out of the range from where a MF can be supported.

Once the in-progress exposure has been completed, the Capture Module pauses Capture. EKOS prepares the MF by:

The Mount Performs the MF

The Mount receives the slew command and works out how to action it. One of 2 things will happen:

The MF will take the mount some time to complete and will be monitored by EKOS. When the mount completes the slew, it will report side of pier to EKOS. EKOS will use this to determine the success, or otherwise, of the MF.

If the side of pier before the MF is different from the side of pier after the MF then the MF succeeded. If it is the same, then the MF failed. EKOS will wait (for 4mins) and retry. This is done to get around small timing differences between EKOS and the Mount when EKOS starts the MF just past the Meridian, but the Mount does not believe it has crossed the Meridian yet.

When the MF is deemed to have been successful, the post MF actions are performed.

EKOS’ Actions After the MF

After a successful MF, EKOS performs the following:

The telescope and imaging train have been flipped through 180 degrees so frames taken after the MF will be “upside down” from those taken before. It is easy enough to compare a before frame with an after frame in Fitsviewer by rotating one of them through 180 degrees.

A good way to get the hang of a MF if you are unsure is to practice in daylight. Whilst all simulators could be used it is also possible to connect up your actual Mount with some other simulators such as the Camera Simulator.

Pick a target near the Meridian, goto it and setup a MF. Watch the target track across the Meridian until the HA limit you have set is reached and then EKOS will perform the MF. This is a good way to check your setup physically for things like snagging cables as well as checking out various configuration options.

Click here for a video explaining how to do a MF.

This is also a good way to workout the physical limits of your setup, i.e. how far your setup can go past the Meridian before the imaging train crashes into the mount. Remember that the impact point may differ for a southern MF than for a northern one. It will also differ as you change your optical train either by adding equipment or changing its physical configuration, e.g. rotating the camera may result in the filter wheel now becoming an earlier point of impact.

Protecting your equipment from crashing into your Mount is very important. A key step is configuring a MF, however, if you forgot to check the MF checkbox on the Mount tab, or if there was a problem somewhere there is still a risk of a crash. So here are some other things to do to add protection:

There are several parameters that can be set to affect the detail of how EKOS performs a MF. These are detailed here:
Reset mount model after meridian flip. Located in the Capture Tab of the Ekos configuration parameters, checking this parameter will clear the alignment model after a MF. If you have problem with the Mount model after a MF it would be worth setting this option. 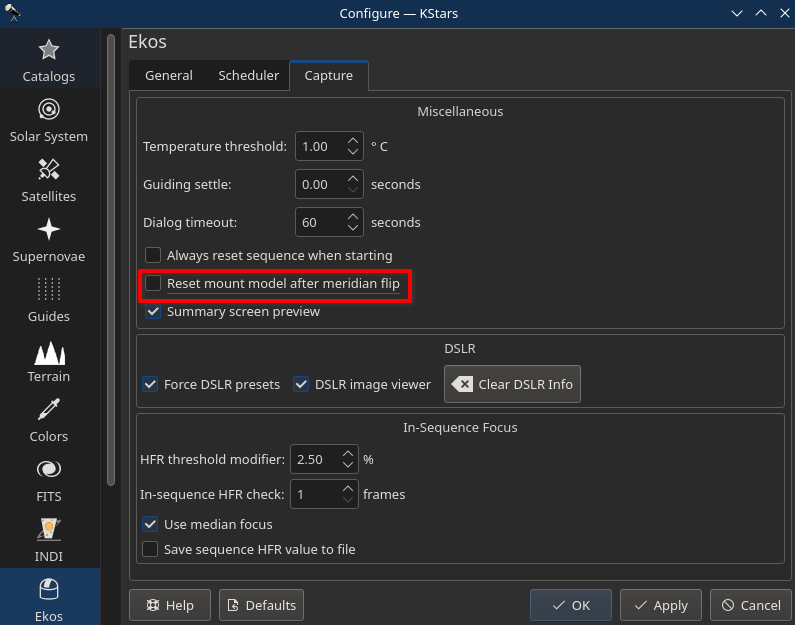 Resetting or Reusing Guide Calibrations. This is a decision you have to make for Guiding in general as to whether you get better results by re-using your guide calibration or by recalibrating after each slew. This is relevant for a MF as, at the Mount level, the MF is treated as a slew.

The thing to bear in mind with calibrations is that they will vary in accuracy at different parts of the sky. The usual recommendation is to try and calibrate somewhere near the intersection of the Meridian and the celestial equator as this will tend to produce the most accurate result assuming your equipment performs equally wherever in the sky it is pointing. Alternatively, for your equipment the theoretical improvement in accuracy obtained from calibrating at a sweet-spot may be outweighed by a calibration specific to where the telescope has just slewed. You will just have to try this out for your equipment and select the best approach, then set the check boxes appropriately: 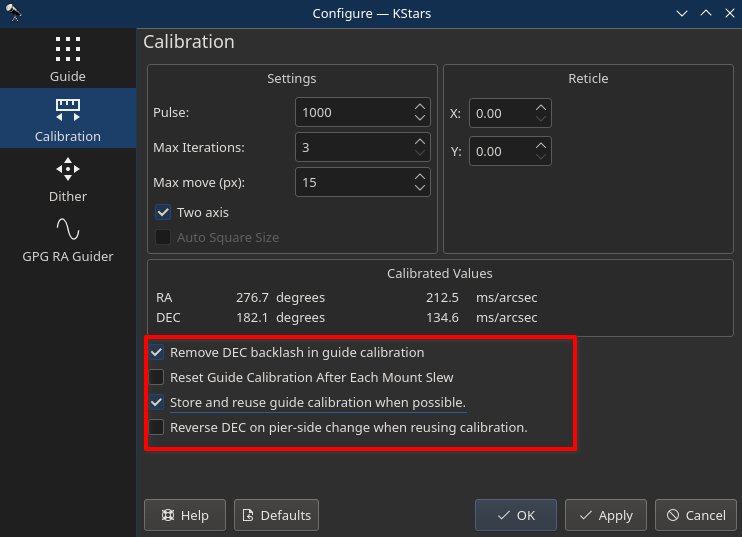 Reverse DEC on pier-side change when reusing calibration. When a MF happens and the pier-side changes, DEC is reversed and the target now appears “upside down”. This does not really matter from a guiding perspective as the Guider will instruct a guide pulse in a certain direction, but the Mount may or may not require the guide pulse in DEC to be inverted. If you can find out the information for your Mount then that helps. Otherwise, leave the option unchecked, but if guiding drives the guide star away in DEC after a MF, rather than centring it, you could try checking this option.
There is an equivalent option in PHD2 and those folks did some work to recommend settings for various mounts, so worth checking here.